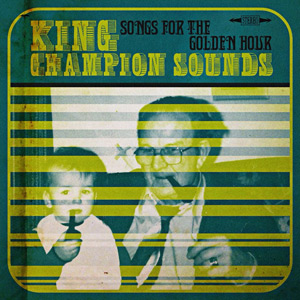 The Ex were (and continue to be) a mighty force. I'll admit, I had my doubts when their longstanding singer, GW Sok departed and they opted to continue on without him (but they may have actually evolved into an even stronger band because of it). I had heard rumors that GW Sok was going to focus on graphic design--which, I don't know why, but that strikes me as an odd profession for an anarchist punk. Even if those rumors were true, he seems to have decided he had more to say, and so is now fronting King Champion Sounds. Songs from the Golden Hour is their second burning missive. The structure of the music is such that it really shouldn't work at all--most of them are glorified drones: every piece essentially held in place over a bass and drums motorik. It all starts with that rhythm section that plays fiercely enough to give the tracks drive and a touch of menace. The horn charts are simple but deployed sparingly, addings a sense of dynamic. Mostly though, it's just a treat to have GW Sok's voice--and his cutting insights--back for another round. He goes toe-to-toe with this new band. As good as they are, with him, they are great.